I KILLED MY CAT TODAY

I know, I’m not supposed to call it that.  I’m supposed to say I put him to sleep, or sent him over the rainbow bridge, or put him out of his misery. After all, he’s been dying by increments for over a year and was in the final stages of renal failure.  I simply euthanized him—an English term based on the Greek: “eu-thanatos” = a good death.

All that is true.  Yet in the aftermath, and as brutal as “I killed my cat today” sounds, I need to own that decision, one of the harder (if not the hardest) I’ve ever made.  I have no issue if others prefer gentler terms.  This is about me, not others.

Grief is one of the great human universals, yet mourning (how we grieve) is highly individual.  I share mine, maybe to make someone else’s easier.

When I worked as a chaplain years ago in oncology, ER, ICU, and cardiology, I dealt a lot with dying people, and with survivors.  So I’m used to all the euphemisms by which we talk about death, because death is scary, final, and horribly painful for those left behind.  (Even when death is partly a relief, it’s still painful and complicated.)  Yet I also learned respect for it.  Faced with that last countdown, time becomes precious.  We’re more fully aware.  We remember the good, even if there was also bad.  It’s not possible, emotionally, for us to think on mortality daily.  We’d go crazy.  But when faced with death, we're reminded of what’s really important.

The dying teach us to live.

Thus over time, I developed a personal dislike for euphemisms, although I do continue to use them, especially with people I don’t know well, or when I can’t explain.  My goal is not to hurt, shock, or offend others in situations that are tender.  Yet for myself, I’ve come to prefer to call things what they are, perhaps out of a profound respect, and awe, and—yes—fear of that ultimate journey.  To become comfortable with death, one has to call it by name.

So when the shoe is on the other foot, and I must accept the terrible responsibility of deciding when it’s time to take the life of another creature, I feel the need to use blunt terms.  To make that decision to kill one's pet must be a struggle of contemplation and/or prayer.  Soul-searching.  It’s HARD.  It's dough-in-the-belly sick hard.

So I use “kill” to make it real for me.  Not murder—I didn’t murder my cat.  Murder implies anger and violence.  Kill is more neutral, but it does suggest decision, and that’s what’s important.  I need to own that decision, and why, in order to heal.

Ever since I called the vet to turn a simple weigh-in to a “probably going to end it” choice, I’ve tried to put it in those honest, blunt terms to myself.  I became aware of precious time.  He had a week, then less than a week.  He had 5 days, 3 days, 24 hours.  Then he had 12, 3, 2, 1….  I didn’t sleep well last night, stayed up late to be with him, even though he’d passed beyond any real desire to snuggle (the heretofore snuggliest cat in the house who would insist on making me or Licorice put up with him curling right beside us).  I went to sleep about 4:30, then got up early, tried to do this and that (nothing that took much thought).

I kept looking at the clock.

And I was back in the zone I remember so well from before.  It’s a holy zone, as death approaches.  Time fractures, distorts.  Reality fogs, yet also sharpens.  Small things gain great importance, “big” things (like all the class finals I've yet to grade) fade away, because in the face of death, they really don’t matter.

It was about 3am last night that I became completely certain that letting Inferno die was the right choice.  I decided after browsing pictures I’d taken earlier documenting his last hours, setting one of him yesterday against another taken in 2012 of a vibrant, healthy, beautiful red-point Siamese with sky-blue eyes.  Seeing the contrast, I fully accepted that my poor Inferno was tired.  He’d put up a mighty fight, lived longer than any of us expected with minimal medical intervention.  I’d like to think we loved him into living that long.  Even his vet had been astonished.  She called him a "miracle cat" when, last spring, his blood-work showed that his kidney function had actually improved just a bit, instead of deteriorating as she'd expected, and had done so without fluid therapy (because he fought it so hard he was in danger of hurting himself). 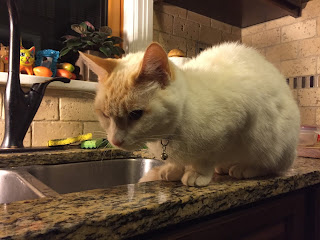 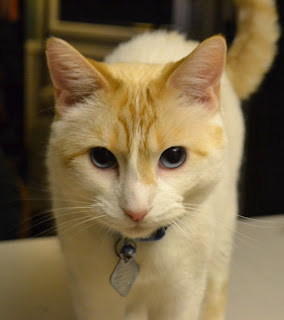 Yet it was the end, and there was nothing dramatic, no fanfare, no looks from Inferno of, "Please let me go."  I’d kept waiting for some significant health dip like he’d experienced back in late October where, for a day or so, I had to carry him around, and made an appointment then for putting him to sleep, only for him to bounce back (like this weird autumn weather).  In late October, I’d never expected him to see Thanksgiving, never mind his 8th birthday, yet November was a good month for him with the warm temperatures.  Then winter came back just as he made his eight birthday on the 8th of December, and his health changed, too.

After the last bad tank, I’d promised myself I wasn’t going to let him get to that point again, where he could barely crawl to his bed or get to the litter box.  So when it became increasingly clear he was going down again, and his eyes glazed over and all he did was eat, sleep, or sit in “meatloaf” position on the table with his poor head bowed till his nose touched the table-top, I decided it was time.  He no longer cuddled.  He no longer wanted to be petted or even touched except around the head.  But I wasn't entirely sure.  After all, he was still eating rather well; he had strength enough to make the leap from the floor to the counter for his dinner.  He could probably have lasted another month, two, maybe even three.  Was it really time to kill my cat?

Yet he wasn't living.  He was just existing.  I didn’t want to carry him, barely able to lift his head, to the vet’s office to die.

So I made a choice.  I killed my cat today.  Because it was the kindest thing I could do for him before he lost all dignity.  He went easy, his “brother” Licorice there in a cat carrier beside him.  He could hear Licorice’s meows, and my voice.  (Not that Licorice really had any idea what was going on.)

Inferno's death was as peaceful as possible.  He got to eat his favorite foods on his last day.  It was sunny out.  We went for a quick (it was cold) walk about the yard.  Ever since I learned he was dying, I decided to let him outside when it got warm.  Yes, it’s dangerous for cats, but he was dying anyway, and he loved to be outside in the sun.  So I was glad today was sunny and we could go for a last walk.  I left the front door open for a while (storm door shut), so he could enjoy the sunshine.  He perched right in it, face up, eyes closed.
He had a good day, today.  He was happy.

And then he died.  It was time.  He had a good death.  But I’m not going to call it euthanasia because that pulls the punch.  I need to feel that punch, so I can grieve.  I left with two cats but came home with one.  The other carrier held just a blanket bearing his residual fur and scent.  It’s sitting beside me on the couch.  I won’t wash it for a while.  And it’s okay to be sad about that.  I had time to prepare; it wasn’t sudden.  I had the luxury of a countdown.  I had the luxury to appreciate that time was precious, and there would be an end.

It’s only in the awareness of endings that we ever truly live, and love in vivid colors.

So yes, I killed my cat today.  Because I loved him that much.

Maybe all good cats cross the rainbow bridge and go to heaven.  I hope so; I hope we meet again.  But my cat died today, and I need to call it that.

Posted by Mathetria at 11:21 PM No comments: