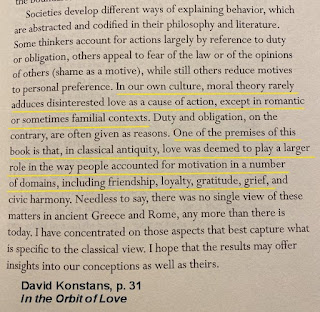 David Konstan’s In the Orbit of Love lays out how ancient Greek concepts of philia (friendship) differ from modern ... and why using modern cultural cues to read ancient friendships is, at best, unwise, at worse, arrogant and ethnocentric.

This is why I’m not that fussed by the idea that maybe Alexander and Hephaistion were friends-without-benefits. Notice I didn’t say “just” friends because “just friends” is SUCH a modern idea. English-speaking countries seem to have special difficulty with super-close friendships to the point we make up words for it: bromance, girl-crush, BFF.

Why isn’t “They love each other” good enough?

(You know the reason: because we tend to elide love and sex, except when applied to family members.)

The best-selling genre of fiction in English-speaking countries is Romance. It is, quite literally, the bread-and-butter of the publishing industry. Even in genres outside Romance, novels that have a love story somewhere often sell better than those without them. Super-close friendships don’t count, and if a novel (or TV show) has one, a chunk of viewers want to make it sexual.

Why is it so hard to wrap our heads around the idea that people can really, really, like REALLY love each other, but not want to have sex with each other?

But this attitude promotes Queer Erasure from history!

No, it doesn’t. I’m all for outing ancient figures where appropriate. Yet the difference in open affection between ancient Greeks and modern Americans (or those of other, more restrained cultures/countries) results in a tendency to misread normal affection as “extreme.” We can go into how homophobia has deprived especially men of emotionally significant non-sexual relationships…but that’s a post for another day. I simply want to underscore that I’m well aware of the impact of homophobia on Queer Erasure.

The answer to that is not to sexualize every close tie that’s not family. Yes, I tend to assume Alexander and Hephaistion were lovers in their youth, and have reasons for doing so, which I’ve argued elsewhere. But at the moment, I want to do a little pushback at the auto-assumption that anyone who thinks they weren’t is homophobic. Er, no.

Konstan’s book details how the concept of philia underlies so much of Greek/Athenian social life. He discusses Rome, for complement and contrast. My chief complaint is, as usual, the Greek part is extremely Athenocentric. He opens by talking about Greece generally, but quickly narrows down to Athens. It’s also strongly focused on philosophic thought. While I think there were some differences in other places (especially the north: Macedon, Epiros, and Thessaly), the basic principles hold true, I believe.

Their society had different emotive constructs that placed friendship much more at the center than we allow today. It might be easier if we described Hephaistion as Alexander’s brother, but Aristotle really did say it best: “One soul in two bodies.” (Diog. Laert. 5.1.20)

Posted by Mathetria at 7:25 PM