(The following post first appeared as part of a blog tour for the release of Dancing with the Lion: Becoming. I will reposting all eight of them on my own blog over the next two weeks.)

I’ve heard that Alexander was sympathetic to women. Was he an early femininst?

Ancient Greece was famously misogynistic. Even Sparta’s supposed freedom for women was all to one purpose: turn them into superior baby-making machines. 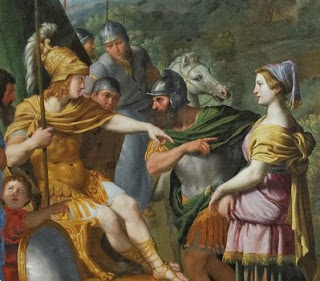 Compared to most Greek men, Alexander did express uncommon respect and sympathy. When Timoklea, a highborn Theban, was brought before him for judgment after having killed her rapists (his soldiers), he took her side. And when he was told his sister Kleopatra had taken a lover (after her husband’s death), his reply was, “Well, she ought to enjoy herself.” To say neither of these responses was typical might be a ginormous understatement.

Likewise, he was kind to the childless Ada of Karia (a kingdom in south Turkey). She’d been queen there before being ousted by a male relative. Alexander put her back on the throne, and she adopted him as her heir. While that eventually got him her kingdom to add to his growing collection, he did seem to genuinely care about her and kept her on the throne until her death.

Then there was Sisygambis, mother of the Persian Great King Darius—e.g., the mum of Alexander’s chief enemy. After the Battle of Issos, the first major encounter between the two kings, Darius fled the field—leaving behind his whole family. Alexander visited them. They’d been wailing not just for Darius (whom they thought dead), but out of fear of rape, etc. What usually happens to women in war. Instead, Alexander had them protected, refused to take Darius’s wife as his mistress because her husband was still alive, and treated the elderly Sisygambis with utmost respect. He continued to call her “Mother” for the rest of his life, sending her presents from his travels. When Alexander later died in Babylon, she turned her chair to the wall and starved herself to death, in grief.

Now, let’s be honest here. These are lovely, romantic tales. Had Timoklea been a slave, not a highborn woman, not only would Alexander not have cared, he’d never have heard about her rape in the first place. And Sisygambis probably feared what would happen after Alexander was gone, so better to die on her own terms. Also, Alexander supposedly gave away his mistress Kampaspe to his favorite painter Apelles because Apelles was (he said) in love with her. So far as we know, Alexander didn’t ask Kampaspe’s opinion before doing this.

So no, Alexander wasn’t a feminist. He belonged to his time. Yet for the ancient world, his sensitivity to women was unusual. We can, I believe, thank his mother (and sisters) for making him as much of a feminist as the ancient world might allow.

Follow Kleopatra’s story in Dancing with the Lion. It’s not ALL about the boys! Alexander’s sister has her own coming-of-age arc across both books, too.