(Another from the series of blogs written for the publication of Dancing with the Lion: Becoming.)

Modern portrayals of Alexander’s mother (Olympias-Myrtalē) are almost universally hostile, not just in fiction, but also in history books. Just consider how Oliver Stone cast and portrayed her in the 2004 “Alexander”: Angelina Jolie in heavy eye-makeup, a snake twined around her arm, slinking about palace corridors to spy, and quite possibly complicit in the murder of her husband, the king.

Was she really such a bitch?

Almost certainly not. She was a woman trying to survive at a polygamous court in a man’s world. She did do some horrific things, although killing her husband wasn’t one of them. But nothing she did wasn’t also done by her husband or son. Their actions were seen as savvy, or at least necessary, politicking. When a woman did it, that was horrible.

Her bad rep owes chiefly to ONE ancient historian: Plutarch. 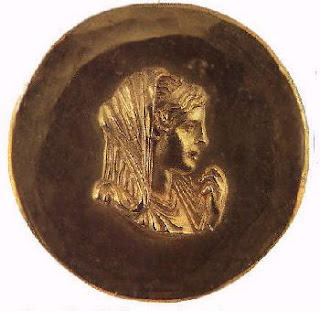 Who the hell is Plutarch and why do you care? Well, he invented biography. He was interested in what made people tick. But he was also a “moralist.” That is, he wasn’t just interested in why Alexander became Great, but in teaching his readers ethics along the way.

Now remember, Greek men were notoriously misogynistic. Perikles of Athens said the best women were not to be spoken of in public, either for ill or good. Plutarch wasn’t from Athens, but he shared the general Greek opinion that there was little worse than a clever woman.

And Myrtalē was extremely clever.

At polygamous courts, the most important male in a woman’s life was not her husband, but her son(s). This is true even in non-polygamous courts, but in a polygamous situation, not only was a woman’s status tied to the sons she could produce, but her very life might hinge on one of them rising to the throne. Philip married five women in his first five years as king. Myrtalē was number four or five (their order isn’t clear). From her perspective, that’s four-to-one odds against her, but she put her son on the throne.

Whether in fiction or history, a lot of emphasis gets placed on the role Alexander’s father played in his life. That’s true in Dancing with the Lion too. As a coming-of-age story, it may explore the love that developed between Alexander and Hephaistion, but even more, it’s a novel about fathers and sons.

Yet it was Alexander’s mother who kept him alive long enough to reach his teen years, where the novel begins. In Dancing, Alexander and Myrtalē do quarrel at times. She has her blind spots, but I made a concerted effort to get away from portrayals of her as some sort of witchy femme-fatale, sexually jealous of Philip’s other wives. She didn’t care who he slept with, as long as it didn’t result in another son to compete with hers.

Want to know more about such a fascinating, powerful woman (outside the novel)? The best modern biography is Elizabeth D. Carney’s Olympias.