“Was Alexander the Great gay?”

I get that question ALL the time. The poor horse has been beaten to death, and discussion always ends in an examination of Greek terminology that’s largely academic. I’ve written about it before elsewhere.

I’d like to look at this from a different angle, here.

For decades (maybe centuries), Alexander has been an icon in the queer community. That upsets a portion of his fanbase, including some Greeks. When early publicity for Oliver Stone’s 2004 blockbuster hinted that Alexander had male lovers, a group of Greek lawyers threatened to sue him. Yet as in the rest of Europe, the younger generation cares less, and in 2015, Greece passed recognition of same-sex civil unions, even if they couldn’t quite make the leap to call it “marriage.” As a result, resistance to Alexander as gay, or at least bisexual, has lessened in Greece. Somewhat.

In the rest of the Western world, “Was Alexander gay?” has shifted for many to “Alexander was gay.” Question to statement.

How’d we get here? Indulge me in a tour of Alexander’s treatment in modern history and recent fiction. I’ll keep it as brief as possible, but stay for the payoff, ‘kay? 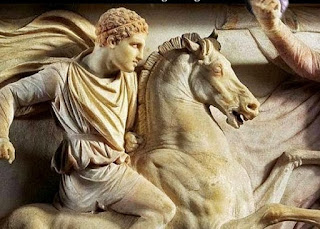 The earliest modern historians of Alexander (late 1800s) wouldn’t even talk about Alexander and men. Then, in the 1930s, W. W. Tarn wrote a “defense” of him from those naughty insinuations in his 2-book biography. It wasn’t very convincing unless you were inclined to be convinced. After, either silence or righteous indignation were the usual responses to the matter, and historians routinely ignored Hephaistion (his probable lover) in their work because it might bring up the homosexual thing.

Then, in 1958, Ernst Badian published, “The Eunuch Bagoas” in The Classical Quarterly, and the ground shook. Yes, his article influenced Mary Renault’s later Persian Boy, but it wasn’t a manifesto on Alexander’s same-sex partners. Badian sought to rehabilitate the ancient sources that Tarn had dismissed because they’d suggested that Bagoas was, you know, REAL. Hence the article title.

After, scholarship began to talk about Alexander and men. Yet a certain discomfort remained. Most ATG (Alexander the Great) historians of the time were cis white straight guys. If many (some of whom I know personally, so can vouch for) were also left-leaning agnostic/atheist liberals, people are products of their era. They might acknowledge that Alexander had male lovers, but thinking too closely about it was outside their comfort zone.*

In addition, this new generation coincided with the “Badian Revision” that attacked Alexander’s image as Romantic Hero or Gentleman Conqueror—fairly, to be honest. He committed some horrific acts. In any case, the then-current trend painted him (and his friends and supporters, including Hephaistion) with a hostile brush, independent of sexual orientation.

Well, maybe. Of them all, Hephaistion faired worst, and a lot of that assessment was colored by his emotional role in Alexander’s life. 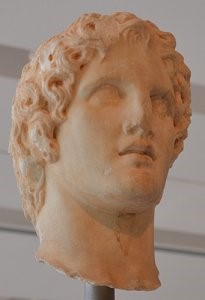 About the same time, Mary Renault (herself bisexual) published Fire from Heaven (1969). We might characterize it as a toe in the water; she’s allusive about Alexander and Hephaistion there. But in 1972, she followed it with The Persian Boy, and threw down the damn gauntlet.

Oh, what a difference a riot can make! Hello, Stonewall.

I’ve noticed a tendency among some younger LGBTQI readers to pooh-pooh Renault for her “off the page” takes on Alexander and sex, or for her idealizing of Alexander, and I agree about the idealizing. But we must place her in her proper historical context. At the time, she was a lightning strike. Whatever I may think of her romanticism, I recognize her enormous impact, and salute her. You go, Grrrrl.

I collect ATG fiction for snorts and giggles, have for a long time. But with a couple exceptions where I was asked to review something, I’ve avoided reading any since 1998, in case it even accidentally influenced my own work. After Dancing with the Lion sold, however, I finally read what I hadn’t, then presented conclusions for an academic paper on Alexander and Hephaistion in fiction post-Stonewall (coinciding with the 50th Anniversary of the riot), presented at Emory in Atlanta for the 2019 annual meeting of the Association of Ancient Historians. I won’t detail the books I covered, but will share the PATTERNS I saw, and let you. Gentle Reader, draw conclusions.

First, and most importantly, all but one novel presented Alexander and Hephaistion as lovers. If the presentations weren’t universally positive, it marked a sharp break with pre-Stonewall books.

Yet several novels ticked “neither of the above.” In some, the relationship was problematized, usually for plot reasons; in others, the author sent mixed messages about homoeroticism (I think accidentally). Curiously, in most of these, Hephaistion was presented positively while Alexander was not. Finally, in the single novel where they were not lovers, Hephaistion was positive, but Greek homoerotic activity was ignored.

Take-away: authors who portray the relationship positively, have a positive Hephaistion. Authors who show it negatively make Hephaistion (and Alexander) morally iffy, at best. Otherwise, it’s a crap-shoot.

Here’s the kicker (and I bet you can guess what’s coming): the positive portrayals were all by women, plus one (British-Lebanese) man. Neutral portrayals might be a mixed bag, gender-wise. The negative ones? All guys. And the one where they weren’t lovers? A guy.

That, to me, sends a powerful message about who’s comfortable with the idea, regardless of whether an author publicly supports LGBTQI rights. Several of the negative ones were published before 2000, but others were recent-ish.

If the queer civil rights movement has made great strides in the 21st century, we’re experiencing a predictable cultural backlash. And in the current environment, I think it hugely important not just for LGBTQI people generally, but especially LGBTQI youth to be able to look at history and say, “Hey! Alexander the Great loved a man, and look what he accomplished!” I won’t go into, here, whether Alexander was “gay,” “bi,” or if we should even use modern terms; I’ll be happy to do that elsewhere over a beer.

Here, I want to say that, YES, dammit, it’s not only okay, but important for the LGBTQI community to claim Alexander. The fact the person he loved best in the world was another guy could keep some queer kid from suicide or self-harm, or even just give her/him/them a reason to get out of bed in the morning.

*This has changed substantially in the past 20 years and it’s now inaccurate to assume ATG scholars are mostly male, white, or straight. At the last International Alexander Symposium (2018, Edmonton, AB), hosted by Frances Pownall, a substantial number of women scholars presented, at least a third. Furthermore, Frances is, together with Sabine Műller and Sulochana Asirvatham editing the proceeds: a 3-woman editorial team. Frances is also editing a festschrift for Elizabeth Carney (one of the most prominent female scholars on Alexander, Macedonia, and the Successors) along with two others, another of whom is female. And of course, Sulo is not only not male, she’s not white. This is the new face of Macedonian scholarship.
Posted by Mathetria at 8:15 PM