When I first announced that I had an historical fiction book coming out, I got a lot of side-eye.

Not necessarily from my professional colleagues. Yeah, a few were (and remain) skeptical, but of historical fiction period, not necessarily mine.

It was largely everybody else. Could an academic spin a good yarn? 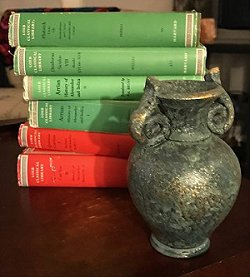 Well, we do it all the time. It’s called teaching, at least if one is any good at it. Not everybody is, of course. Also, what constitutes “a good yarn” can vary (just read reviews on Amazon).

First, I’ve been a writer longer than a professor. I’ve even published other things (not historical fiction). I’ve joked that most writers who take their craft seriously do conduct considerable research, they just don’t go on to get a degree in the subject. So it’s probably more fair to say I’m a writer who became an academic, rather than an academic who became a writer.

Second, to me, telling a story is all about the characters, and their emotions.

So Dancing with the Lion begins with a runaway boy who’s angry at the world because his favorite brother died, and another who fears he’ll never measure up as the son of the most powerful man in Greece. What happens when they meet? It’s also about those boys’ relationships with their fathers. And for Alexandros, with his mother and sisters. It’s a love story, yes, but also a story about family, and friendship. So it really IS a love story, not just a “falling in love” story. All kinds of love. And a little bit of hate, too, here and there.

It happens to be set in ancient Macedonia (a kingdom just north of Greece). While reading Dancing, I hope readers get the same sense they might being led around New York City by a native New Yorker. I want the place to feel PALPABLE. Real. Deep. This isn’t one of those, “See 7 cities in 6 days” tours.

Yet the story isn’t about Macedonia. The story is about Alexandros and Hephaistion growing up there. Some of what they experience are human universals: grief, first love, fear of failure. Some is a little more specific: going into battle for the first time, or dealing with brawling parents. Yet for me, the focus remains on how these characters cope with what they face.

For instance, and without giving too much of a spoiler, in one scene after Hephaistion has been hurt, Alexandros goes to the temple of Darron, the Macedonian god of medicine, in order to make a sacrifice for his friend. It’s not unlike going to the hospital chapel to pray for somebody in the ER. But I don’t walk readers through the steps of ancient Greek sacrifice. Nobody is there for my class on Greek religion. The scene is about Alexandros’s fear for his friend.

That’s why it’s a novel, not a history book.

(*And yes, those are my beaten-up Loebs of the 4 primary Alexander historians [minus Justin]. Once upon a time, they were all pretty and new. LOL.)
Posted by Mathetria at 6:15 PM