Hoo-boy, don’t get me started or I might skewer somebody. (Author at right, with a Macedonian sarissa.)

Funny story about SF author Catherine Asaro: she’s known for her hard-SF Romances, but what a lot of readers don’t know is she’s also Dr. Catherine Asaro, with a PhD in chemical physics from no less a school than Harvard. Some years back, on a now-defunct bulletin board, a male reader proceeded to try to mansplain how Asaro’s physics of space travel just wouldn’t work, and poor lady authors who want to write romance shouldn’t attempt a SERIOUS genre such as hard SF. Well, Dr. Asaro dropped into the convo, citing several of her own published articles in peer-reviewed journals, then proceeded to demolish fan-boy’s ignorant objections to her theories. It was a beautiful thing to behold.

Women do math and science, dammit—as demonstrated by my Kleopatra in the novels.

I don’t believe for one minute that women readers, as much as men readers wouldn't like to know a little about the military matters I describe in Dancing with the Lion, not just the hair and clothes (as I do detail in another blog).

When non-specialist modern readers imagine ancient Mediterranean armies, it’s usually the Roman legion that comes to mind. The Greek phalanx is similar…but not. A phalanx is a big rectangular block of infantry, usually 8-deep, that presented a “locked shields” front. Larger armies were made up of several phalanges (phalanxes) in a row. Armies were chiefly infantry as horses don’t do well in the rocky Greek south. So their armies had a lot of light troops, such as slingers, but little horse.
Yet Greek infantry was legendary. These “Men of Bronze” were sought-after mercenaries in Ancient Near Eastern armies, and would famously rout the Persians at the Battle of Marathon despite being outnumbered. Southern Greek cities also had excellent navies, although Macedonia didn’t, so I won’t address navies here. 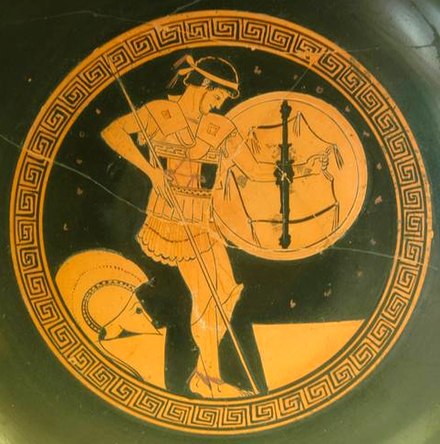 The infantryman, or “hoplite,” was armed with a big-ass round, convex shield covering him from chin to knee; a bronze helmet; and—depending on how much money his family had—a bronze breastplate or a cuirass of fused, tough, glued linen with girdle plates; and maybe bronze greaves covering his shins. From the front, this presented a pretty solid defense. But if, in video-games, Greek soldiers all look alike, in truth, Greek armor varied a lot. Helmet styles differed vastly by region, and how much armor a soldier could afford also differed. Shield devices were personal (as in the image above). Put simply: THERE WAS NO ANCIENT GREEK UNIFORM. Individuality mattered. (Hoplite arming, image shows how the shield was held inside.)

Why the differences among real soldiers? They armed themselves; city-states didn’t provide equipment. So what they brought to the field was whatever they could afford. Also, the primary weapon of the Greek infantryman was the SPEAR, not a sword. Swords were secondary, used only after your spear broke. While Greek armies did have archers along with slingers and peltasts (javelin-men), Greek infantry viewed the bow as a coward’s weapon.

When Philip took over as king of Macedon, the army got a serious overhaul. First, Macedonia—unlike the south—had horses. In fact, prior Macedonian armies had been CAVALRY armies, with limited infantry. Philip reformed the infantry by lightening their armor and giving them the ultimate “pig-poker”: a 15-foot sarissa, or pike. It was about twice as long as a normal Greek spear, requiring one to wield it two-handed.

Then he shaped up the cavalry, arming them more heavily and deploying them in triangular “spear point” formations, which allowed them to shift direction quickly at a gallop. They carried the xyston, which wasn’t as long as a sarissa, but still formidable. Incidentally, ancient cavalry used neither saddles nor stirrups, only a saddlecloth.

This Macedonian sarissa phalanx became the ANVIL, while his heavy cavalry became the HAMMER. The Macedonian phalanx would engage the enemy, holding them in place on the battlefield, then Philip would send in his much more mobile cavalry to smash into the enemy flank or rear, tearing them to shreds. It worked. Over and over, it worked. Alexander took that formation strategy to Asia. It worked there too.

So when I describe military matters in Dancing with the Lion, now readers have a better visual image. And don’t let anybody tell you female readers can’t enjoy reading battle scenes, or that female novelists can’t write them.

The hell we can!

After all, the ancient Greeks paired the goddess of love, Aphrodite, with the god of war, Ares. And in the Ancient Near East? Innana/Ishtar was goddess of both, together.

(The sarissa I'm holding above is part of the on-going research of Dr. Graham Wrightson, USD, who kindly let the author handle it, as she also teaches an undergraduate capstone class as well as a graduate seminar on Greek military history. The other modern image belongs to Ryan Jones, another Calgary graduate under Waldemar Heckel.)

Posted by Mathetria at 9:07 PM